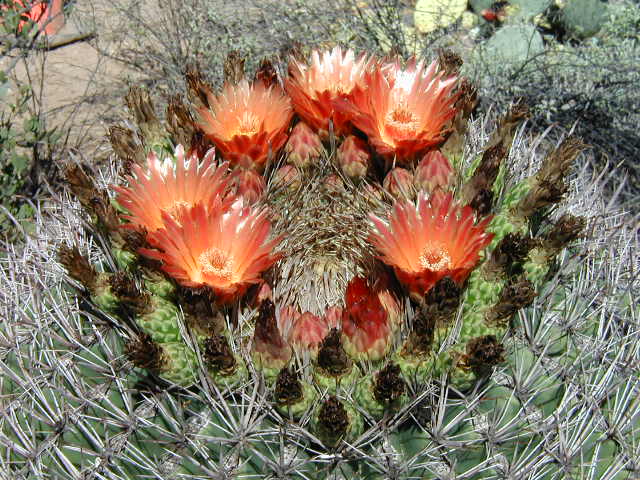 Excerpt from my journal while on my epic road trip twenty years ago.

Yesterday as I was planning the next couple of weeks of travel I was debating between a couple of choices; despite the heat I chose heading south to the Sonoran Desert in Tucson, the Chiricahuas, and southwest New Mexico before heading to Albuquerque. These are mostly areas that are new to me and I decided that I wanted to go off the beaten path.  I also figured that after the 121-degree weather in Las Vegas I was ready for whatever heat awaited me.

My expectation was that the desert would be brown and desiccated looking.  Surprise – this is the season just after summer rains and everything was green and there were lots of flowers.  There were also a zillion bright red prickly pears; I was told that there was a bumper crop this season.  During the course of the day, I got to sample prickly pear jam, sauce and salad dressing, all of which are pretty tasty.

Most of my day was spent at the Saguaro State Park and at the Sonora Desert Museum.  The Sonoran Desert Museum is a rich stew of natural history museum, botanical garden, zoo, and aviary spiced up with anything else they can think of having to do with the Sonoran Desert.  It was hot, 105 degrees to be exact, and according to a chalkboard at the museum this is pretty typical, they’ve had 81 days of 100+ weather so far this year.

Despite the heat I enjoyed wandering around the exhibits and chatting with the docents who had plenty of time to answer questions.  I learned that saguaro cacti live to be 250 years or older; a 5’5” cactus is only about 50 years old.  I saw ones that were 20-25’ or higher.  They’re also amazing plants in that their pleated structure allows them to expand or contract like an accordion depending upon the amount of moisture available.