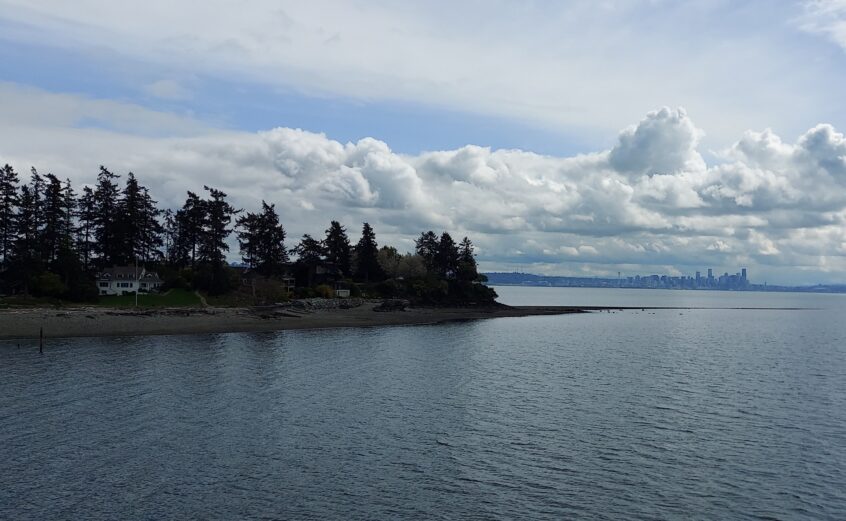 The ferry from Seattle to Bainbridge Island takes less than thirty minutes. But step off the ferry and you feel as though you’ve been transported much further than that.  It’s easy to walk to town, passing by several trailheads, unusual sculpture, and lots of green.

Once in town, the pace is slower than across the bay. There are several museums, lots of galleries, restaurants, places to sit and sip a coffee or glass of wine.  Lunch was at Ba / Sa restaurant, where I ate one of the best Korean meals I’ve ever had.

What was particularly striking was that prior to boarding the ferry we’d walked through the Pioneer Square neighborhood.  That’s where Seattle started and where prospectors obtained their supplies during the Klondike gold rush in the late 1800s. It’s filled with handsome buildings, mostly Renaissance Revival, which are looking shabby, even derelict.  It’s disconcerting walking around, plywood covers most ground floor windows (albeit with interesting artwork), the homeless population is everywhere, and the streets are rubbish strewn. Bainbridge Island was the antithesis of Pioneer Square—clean, well maintained and very green.

You’d think given its history the city would be interested in maintaining the Pioneer Square neighborhood, but all emphasis seems to be on constructing newer, larger properties.  Many years ago, I thought it would become like SoHo in New York City, a mecca for artists. There were some galleries and studios beginning to spring up. Sadly, that has not come to pass.

The ferry ride, on a warm sunny day, offered expansive views of the city with a backdrop of the Cascade Mountains.  It was a fitting way to end my Pacific Northwest stay—tomorrow I fly back to New York City.