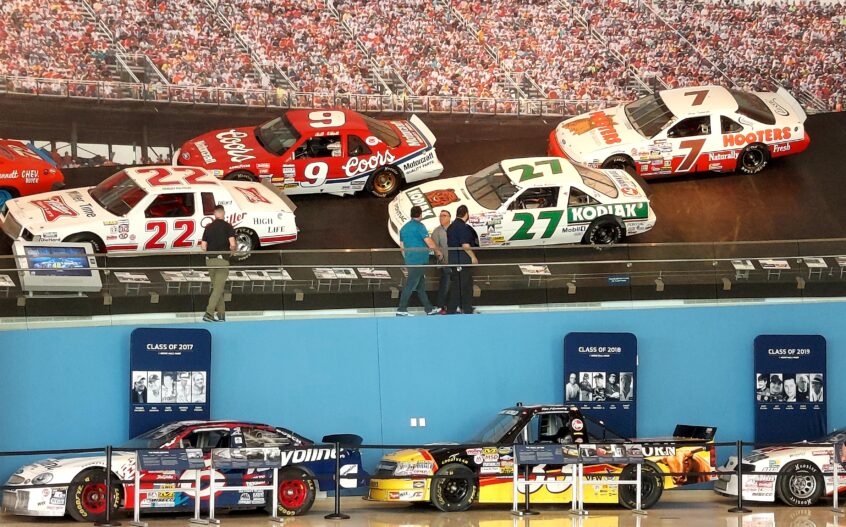 When in Charlotte do as the locals do—go to the Nascar Hall of Fame.  Nascar (stock car racing) is THE sport in North Carolina.  While it isn’t something I’ve ever been to, I’ve long wanted to go to a Nascar race, as a slice of American life I felt it was something important to experience. Somehow, I never got to one.

The Hall of Fame was fascinating, both for the exhibits and the visitors.  For starters, this is the only museum I’ve ever been to where men outnumbered women by a factor of about ten to one. It was also a very white crowd, not surprising since nearly all drivers and most of the pit crews are white, not a sport that has evolved much in equality.  And, it certainly wasn’t the typical crowd you’d find at an art or science museum.  But people were really into it.

I loved it too and learned a lot.  Stock car racing started during prohibition, when moonshiners beefed up their cars to outrun the police. That led to bragging about how fast cars could go, which led to impromptu races, which eventually led to the racing of today.

Seeing racing cars from the earliest days until now was fascinating.  I loved seeing the evolution of the cars, including sponsorships, tricked out fenders, stripping down the insides of the car to lower the total weight and on and on.  I didn’t try the simulator, but for a fee you can try your hand at driving a race car (in the safest possible environment) or try being part of a pit stop crew.

Note:  I’d been in Charlotte many times for business back in the 90s and 00s. The city has grown enormously and looks quite different.  Loved all the street art, including a miniature golf course featuring city icons, including Queen Charlotte.