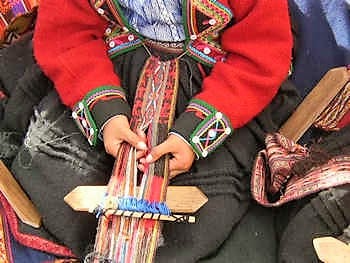 When I traveled to Peru fifteen years ago, I visited a weaver’s co-op in the village of Chinchero.

Located high in the Andes, not far from Cusco, the setting is breathtaking. It’s also literally breathtaking because of the altitude. Fortified by coca leaf tea to relieve altitude sickness, I spent an afternoon with hospitable women.

My rudimentary Spanish helped to break the ice, and when I asked if I could try weaving, the women were at first baffled, then delighted. They taught me the basics of using a handloom.

In return, I purchased several belts and bags, identifying which woman had woven each.