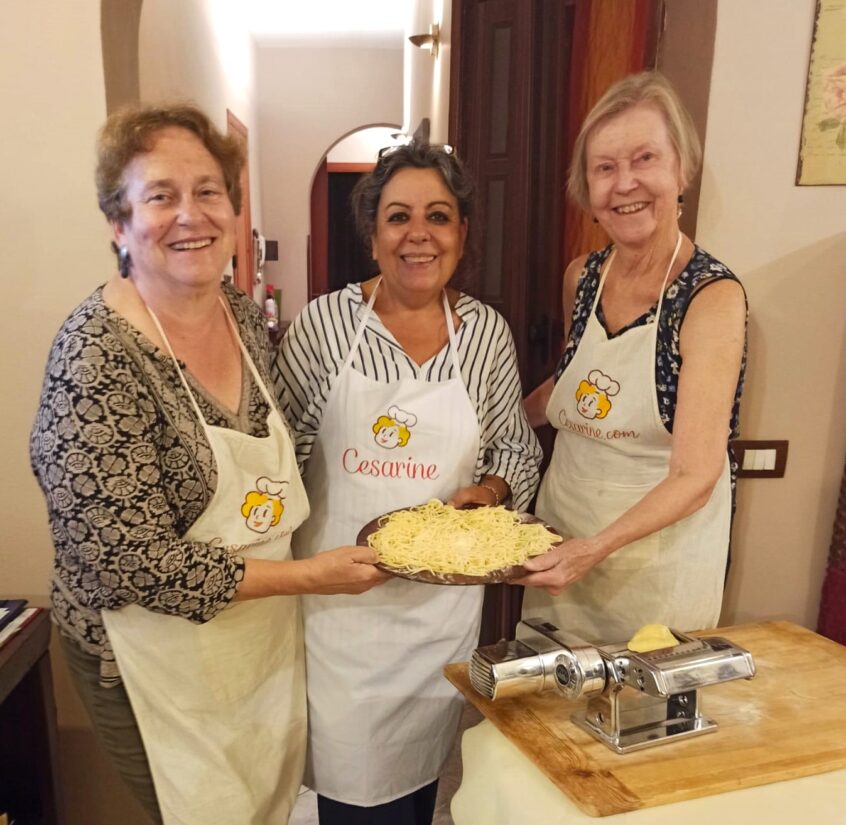 Our big activity for the day was scheduled for 5 PM. With a full day ahead of us we headed to Termini Imerse, a city within Palermo. Much of it is industrial, but there’s also an old section that has Roman ruins and what is described as a fantastic museum.

The first segment of the way there was a tranquil drive along the water. As we neared the city Ditzy (the GPS) started getting confused. She wanted us to make a turn onto a steep one lane dirt road. We ignored her. “Recalculating.” At the next dirt road, equally steep, she again wanted us to turn. I swear this time Ditzy screamed “Recalculating,” as we drove past her suggested route.

Eventually we made it into the old city. That’s when her shortcomings became pronounced. We figured out that if a road was going in the right direction, she’d send us down it. However, many of her suggestions were for one-way streets going the wrong direction, streets so narrow a motorcycle would barely make it through or gated streets. Thankfully, Kathy was driving.  Even though I easily drive in Manhattan, the super-narrow streets filled with cars and pedestrians, and the general chaos, had me on edge.  By the time we located the museum and searched for parking, the museum was about to close for a three-hour break.

We could have had lunch in Termini Imerse but there was nowhere to park. Kathy was glad she had the experience of being in a Sicilian City. I just wanted to get the hell out.

Since the location for our cooking class was nearby, we headed there. We immediately found parking. But every restaurant was shut tight. We found an open gelateria with tables facing the sea. Kathy ate a panini and I had Stracciatella gelato. A delicious if strange lunch. We ate facing the sea. We walked into the central piazza right as school let out and we watched dozens of kids walking home or getting picked up in cars by a parent.

After that it was as if someone had turned off a switch for communal nap time. We sat in the central piazza for a while watching the few people who walked through but mostly it was deserted.

Since the sea was close, we headed there. Ditzy again threw fits as we ignored her directions, which tried to take us down alleys and gated streets. The residential area near the water is very modern and appears to be vacation homes.  When we finally located the beach, we had it to ourselves. Kathy and I dipped our toes in the water, picked up perfectly smoothed pebbles and enjoyed the sun and sea. If we’d had our bathing suits, we would have gone for a swim.

It was time for a brief nap before returning for our cooking class. We were having a private lesson.

I will start by saying it was the highlight of the day and a highlight of the whole trip. Graziella, our teacher and host, met us outside her home with a huge smile. I swear that smile never left her face except when she was deeply concentrating.

The town had awakened from its communal nap and was buzzing. We went shopping for ingredients for our dinner—appertivo, pasta, and Tiramisu. In each shop the proprietor was friendly and happy that Americans were in town. Graziella explained any of the unusual items in the shop. I especially loved the yard-long zucchini.

Then up to Graziella’s apartment. If I lived there, I’d spend all my time on the terrace; the view of sea and mountains is glorious. But we were there to cook. We donned aprons and began with making the cream for the Tiramisu. Graziella patiently demonstrated and then gently corrected as we whipped egg yolks and sugar, whipped egg whites into peaks and then folded them together with a spoonful of strong coffee. We assembled the tiramisu with lady fingers dipped into coffee, the cream applied through a pastry funnel and the completed dish decorated with a generous helping of powdered chocolate. All the while we sipped glasses of wine and chatted with Graziella.

Next, we made pasta. We worked flour, eggs, and water together to form the dough. Then used a pasta machine to roll it, Graziella again giving careful instructions and demonstrating. The sheets of dough were then put onto a “guitar” than sliced the sheets into narrow spaghetti-like strips. Dusted with flour we amassed enough pasta for a large family. With the leftover dough Graziella demonstrated making gnocchi. I became a whiz at it and will definitely make it at home – almost no equipment is required.

Time for appertivo on the terrace. Salami, olives, a variety of cheeses, ricotta, honey, nuts and more. That alone could have been dinner.

Back inside we watched as Graziella combined the pasta with fresh tomatoes and basil. The result was gorgeous. Topped with freshly grated parmesan, it was simple and scrumptious. As was the tiramisu.

Stuffed, we exchanged hugs with Graziella and said our goodbyes.

If you are ever in this area and are interested in taking a cooking class with Graziella, which I highly recommend, let me know.  I’ll send you her contact information.