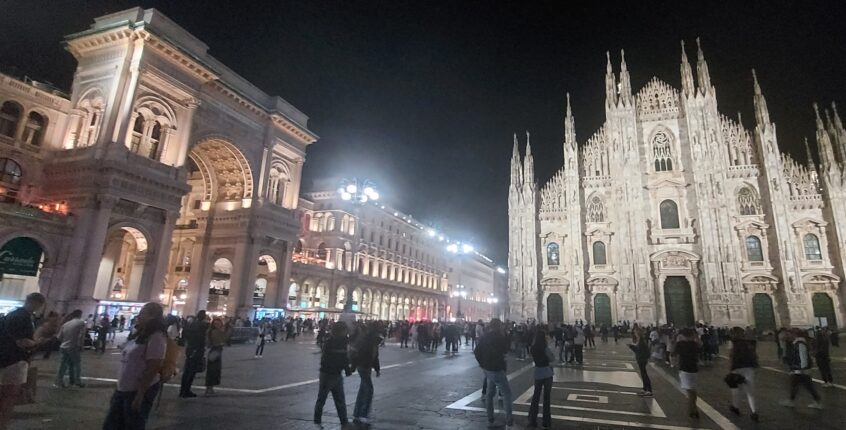 As Kathy, her friend Gabriella and her son Cyril and I  walked from the trolley towards the Duomo we each uttered a series of WOWs. Galleria Vittorio Emanuele II is without question the most glamorous shopping area I’ve ever experienced. I wouldn’t even consider buying anything there, but the glamour of the domed ceiling, long arcades, tiled floors, and elegant shops make it a showstopper.

The second series of WOWs came as we walked caught our first sight of the Duomo. The cathedral, completed in the fourteenth century, is enormous and stands apart from other buildings.  In the morning sun it positively gleamed. The intricate sculpted façade (over 3,500 figures) and a seemingly infinite number of spires reaching into the deep blue sky are breathtaking.

Though we arrived early, the crowds were enormous, and we decided to put off further exploration of the Duomo for another day. Instead, we took a hop-on-hop-off bus tour of Milan. Rome, Florence, and Venice may be greater tourist attractions, but Milan is spectacular—a mix of old and ultra-modern.

We passed La Scala, the famed opera house, Castello Sforzesco, a complex of fortresses, castles and towers from the fifteenth century, the elegant main railway station, ancient basilicas, residences with elaborate Juliet balconies and slews of other impressive looking museums and buildings. I noted that everything was immaculately maintained, the streets are clean, and everything well kept, even areas that attracted large crowds.

From ancient Milan we traveled into the modern, even futuristic area of the city. Three unusual skyscrapers dominate the view—one designed by Habib, one by Libeskind, and the third by Isosaki. But the most striking ones are Bosco Verticale– a pair of residential towers that are home to over 21,000 trees, shrubs and perennial plants. They are attractive and environmentally friendly. In an adjacent area a large park was built on the top of a shopping complex.

Returning to the Duomo, the crowds had grown substantially. It took us a while, but we found a place for lunch with an astonishing view of the Duomo. After lunch Gabriella and Cyril set off to the train station for their return trip to Luzern. Kathy and I took another bus ride so we could see it all again.

In the evening, after a nap, Kathy and I returned to see the center city lit up. Fabulous is the only way to describe it. For dinner I tried the city’s famed dish—saffron risotto. It was scrumptious.