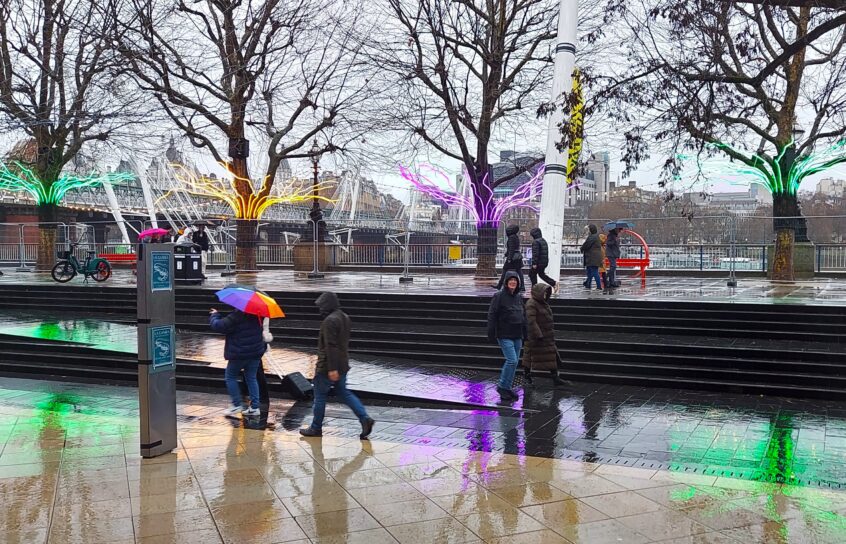 The weather today was dismal, which dampened not only our clothes but also our plans. We had matinee tickets for a play at the National Theater at Southbank. Southbank is an area that borders the Thames and is a favorite place to walk. But not today. The forceful blasts of wind snapped my umbrella. It got tossed into the dustbin. I pulled my hood up and charged through the rain. London had spectacular fireworks show scheduled. I wondered if it would proceed.

Tea warmed Sue and me up. In the theater’s bookshop I found a copy of a book by one of my favorite authors, Bill Bryson, that I’d never seen—”Shakespeare, The World as Stage.” I checked Amazon and the paperback in the U.S. sells for $42.49, so I bought a copy (for $11).

The play, Kerry Jackson, is something that will never cross the pond.  It is uniquely British. In fact, for the first few minutes I wasn’t certain I’d be able to understand the accents.  Then my ear became accustomed to them and it was fine. The play was alternately funny and very sad. Great writing and acting and thoroughly enjoyable.

Then back through the rain to the tube station. Along the way there were hundreds of police, there to keep crowds in order who would be watching the fireworks from the riverside.  There was again a steady rain, so I still wasn’t sure if they would happen.

Our destination was South Kensington, where we planned to meet with my friends Pascale and Isabelle for dinner. The tube was eerily quiet. We made it to the restaurant, Riccardo’s, in record time. We arrived ridiculously early. Glasses of wine helped pass the time. Dinner and conversation were both delicious. Our dinner ended long before midnight and we returned to our hotel.

While damp, the rain had stopped. We watched the spectacular fireworks on TV.