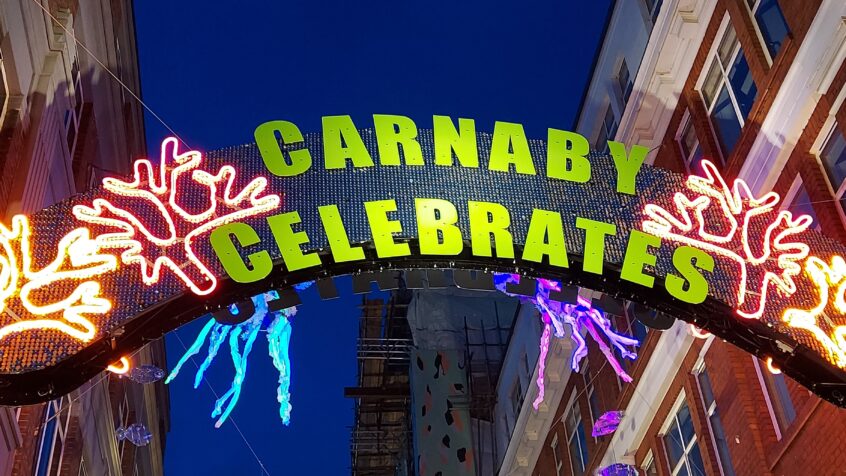 My good friend Pascale lives in London. Her friend Isabel who lives in Paris was visiting her. We’d arranged to meet for lunch at Senor Ceviche, a Peruvian restaurant.

I had loads of time, so after exiting the tube station I wandered around somewhat aimlessly. Out of nostalgia I did a quick walk-through of Marks & Sparks (Spencer’s). In years past everything in the store was designed and manufactured in England. Now, nearly all items are manufactured abroad. I left empty-handed.

The restaurant is just off Carnaby Street. The last time I’d been there was in the early 70s. Then, it was a vibrant scene, a mecca for music and experimentation of all sorts. It attracted skinheads, punks, and every sort of oddball in London, anyone with a rebellious streak.  It’s where you went to find vintage clothing stores, emerging designers, and the absolute latest trends. It’s still a vibrant scene but crowded with upscale stores, loads of restaurants, and hordes of tourists shopping as if no other stores existed in London.

Lunch went on for hours. I was the first one in the Senor Ceviche restaurant at lunchtime and we were nearly the last to leave. We had a set menu that was enormous and delicious and included several varieties of ceviche, lamb chops, chicken, pork belly and more. We downed a bottle of wine while we ate and gabbed.

When at last we parted, I decided to walk off the meal. My next stop would be for dinner with Sue at her favorite fish and chips place. I meandered through the streets for a couple of hours, window shopping and people watching. The crowds were thick, even on side streets. As I was nearing the restaurant, the skies opened, and it began to rain. I dashed into Rock, Plaice and Sole. The fish and chips were great — fresh, hot, and crispy. When splashed with malt vinegar the taste brought me back to my early years in London. However, after the huge lunch I’d eaten, I could have skipped the meal entirely.

The show we attended this evening was Life of Pi. I’d loved the book and was curious to see how they’d adapt it for the stage. It was masterful. The animals were fantastic puppets. The set and lighting were inventive and effective in switching from a hospital room to a boat on the sea.  Nuwan Hugh Perera, as Pi, was riveting. I’ve no idea how he manages to perform the very physical and emotional role every evening.

When we left the theater, the area was mobbed.  The tube station was closed because of the crowds. Uber wasn’t available. We walked several blocks and by sheer luck, found a taxi. Traffic was at a standstill; we think someone had been hit by a vehicle. So, we chatted with the cabbie, a proper British taxi driver. It was a very enlightening talk about everything from the environment, population growth, politics (American and British) and more. He thanked us as we exited the taxi.