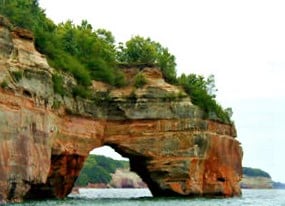 Twenty years ago today, I started with a cruise on Lake Superior to see the Pictured Rocks; a sight I’d been told I shouldn’t miss. I had some misgivings about going out on a gray, cold day, but assumed we’d be in a warm dry cabin. That was true until we arrived at the Pictured Rocks, when everyone opened the windows to take photos.

Despite frozen fingers I managed to take a gazillion shots. Though wearing three layers (turtleneck, fleece jacket and windbreaker), I was jealous of the folk who had been smart enough to bring woolen hats, gloves and scarves.

The rock formations extend for fourteen miles and are decked out in vivid reds, yellows, greens, browns, and gold, black, white and every permutation possible. The colors are caused by the leeching of chemicals out of the rock (iron ore, copper, dolomite) as well as by mosses and tannic acid from the decaying leaves.

Looking at the rock faces is a bit like looking into cloud formations; nearly everyone sees something different. Some people saw faces or figures or animals.

As I stared at the rocks, I could see the Amalfi Coast in Italy (I was trying to think warm thoughts), mountain ranges, and cityscapes. Clearly, I’m travel obsessed.