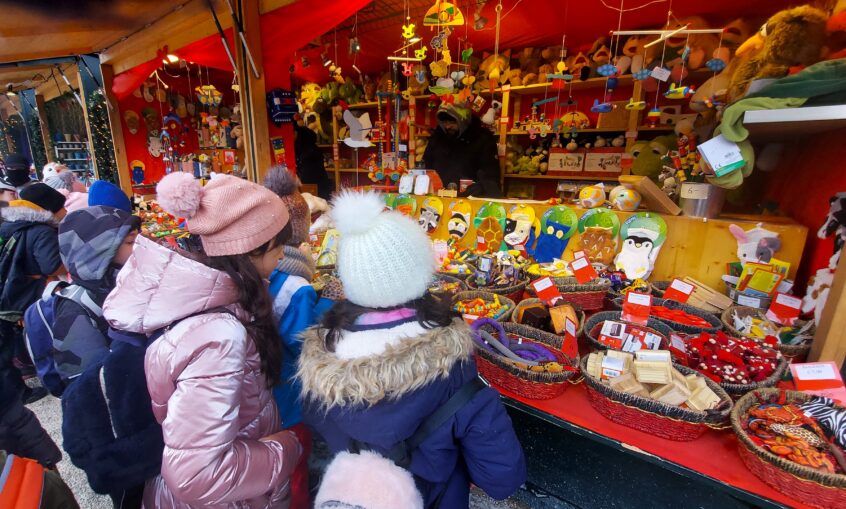 I am on a tour of European Christmas markets — first stop Vienna. After breakfast I met the rest of our small group—six of us—plus our guide Rich. We headed out on a tram to see Schönbrunn Palace. At that point there was a gentle snowfall, enough to be pretty, not enough to be a problem.

Years ago, I visited Schönbrunn in the springtime. This was a vastly different experience, we never set foot in the gardens, which is what I remember most. The “grand tour,” a self-guided audio tour of the Palace took us through what felt like hundreds of ornate rooms. No photography allowed. The rooms and history were interesting, but after a while (and especially when visiting Marie Antoinette’s lavish sitting room) I understood why the peasants wanted her head.

Outside, a Christmas market (one of a dozen in the city) beckoned and we spent time wandering. This one was especially nice in that many of the items were handcrafted, rather than the usual tchotchkes from China. There were also many stands selling hot chocolate, Punsch (rum-based fruit drinks) and Glühwein (mulled wine, red or white, with spices). There were also an insane number of pastries and the largest pretzels I’ve ever seen. With the snow really coming down, it definitely felt like Christmastime.

From there it was off to lunch. I decided to be prudent and have a salad, but then I drank a hot chocolate—which was so decadent it completely negated my being good with the salad.  But well worth it.

Next, we walked to the Spanish Riding School. But first, another Christmas Market in front of the entrance to the school. We didn’t get to see the horses perform (that’s only on the weekends, and tickets are sold out for the next several months) but got to see the riding arena, learn about the history of the Lipizzaner horses, and meet some of the seventy horses on site.  By that point, large, fluffy flakes were coming down in curtains. The temperature had also dropped and even with my “walking sleeping bag” coat, I could feel the cold.