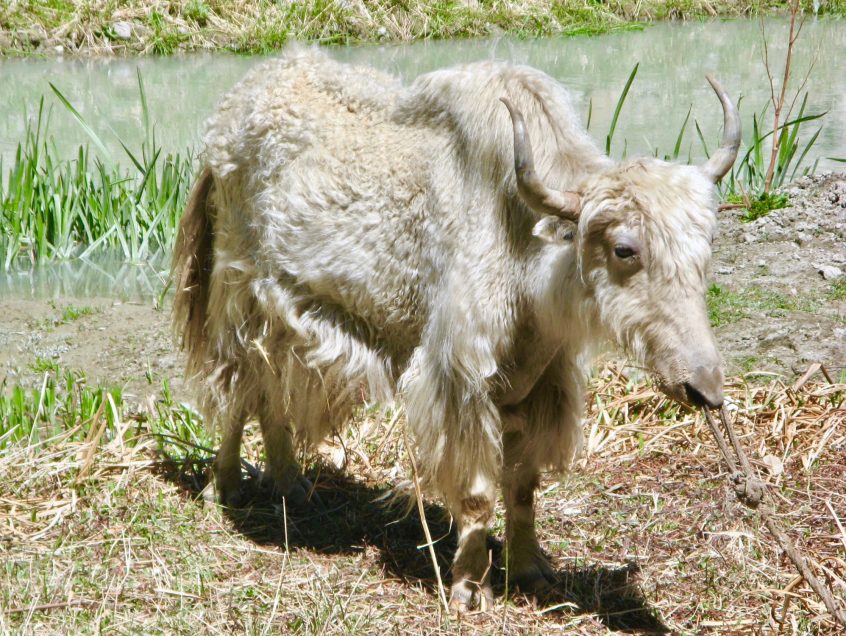 An excerpt from my upcoming travel memoir “Travel Mania:” “As our plane passed over, I got my first glimpse of the Himalayas. At first they didn’t look much different from the Rockies—snow-covered peaks with deep valleys and the occasional river gorge. Then the mountains sharpened. The peaks became jagged, knife blades slicing the sky, a series of lethal weapons, tightly packed. The Himalayas looked fresh, un-weathered, untouched. They are also very high; Lhasa, cradled in a valley between peaks, is at twelve thousand feet.

Ninety-five percent of Tibetans are Buddhists and we saw our first evidence of the extent of the religion while on the ride from the airport to Lhasa. Hundreds of banners of multicolored prayer flags were draped across the river, on mountains, on homes. The driver pulled over so we could take pictures of a yak wandering on the side of the road. For the Tibetans, it would be like tourists to Wisconsin stopping to photograph every cow. Massive animals, far larger than cows, with long horns and very shaggy fur, they are a mainstay of Tibetan life. When alive, they provide milk, butter, and cheese and are used as transportation. Slaughtered, they provide meat, fur, and leather. The bones are used for jewelry and tools. Most wild yaks are extinct, but large herds of domesticated yaks survive. If I got the numbers right, the human population of Tibet is two million; the yak population is five million. At the hotel, we were greeted with a cup of Yak Butter Tea, the most common beverage in Tibet. The greasy, mild drink, served at room temperature and offered at all ceremonial occasions, is not my favorite. This was followed by a lunch of yak cheeseburgers—yak meat, yak cheese. It was our first of many local specialties we tasted: yak lung, yak blood, yak blood sausage, yak and onion stew, yak meat stuffed spicy peppers. Yak definitely doesn’t taste like chicken; it has a gamy but tasty flavor.

Wandering through Barkhor Bazaar, we explored stall after stall, shop after shop filled with tantalizing goods. While some offered typical tourist fare, T-shirts and baseball caps emblazoned with yaks, most of the goods for sale were uniquely Tibetan. Religious items predominated—prayer flags, prayer wheels, religious paintings called thangkas, strings of prayer beads, cups and wicks for burning oil, and other items I couldn’t even begin to identify. Elaborate silver and semiprecious stone jewelry was in abundance, so much so we were nearly overwhelmed. There were also stalls displaying locally useful items: pots, pans, and hundreds of blenders. Around the edges of the bazaar were enormous advertisements for blenders, and I wondered why they were so important. 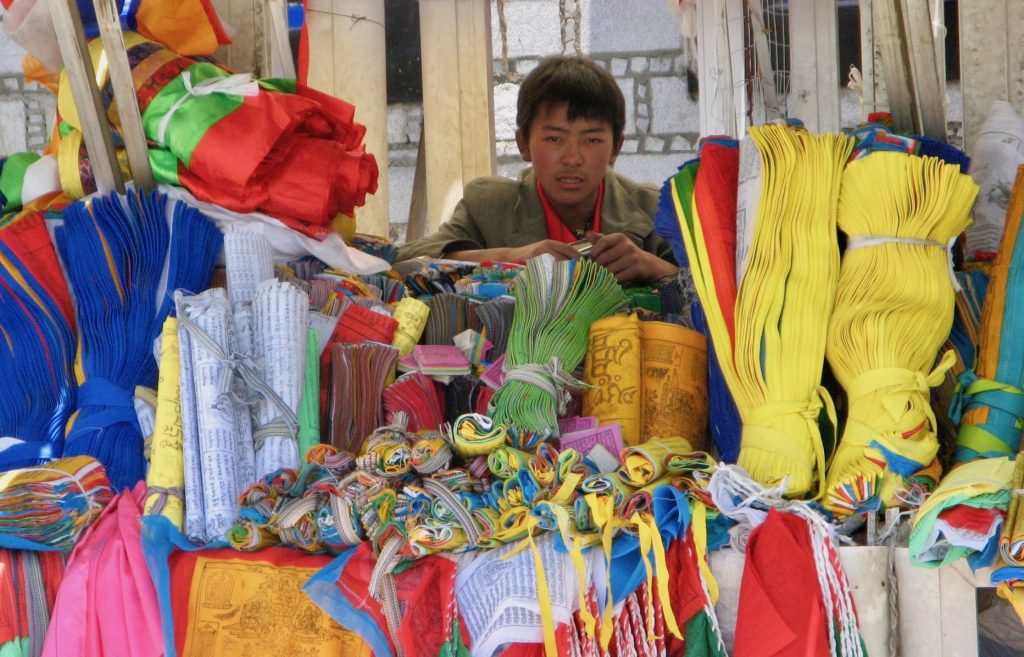