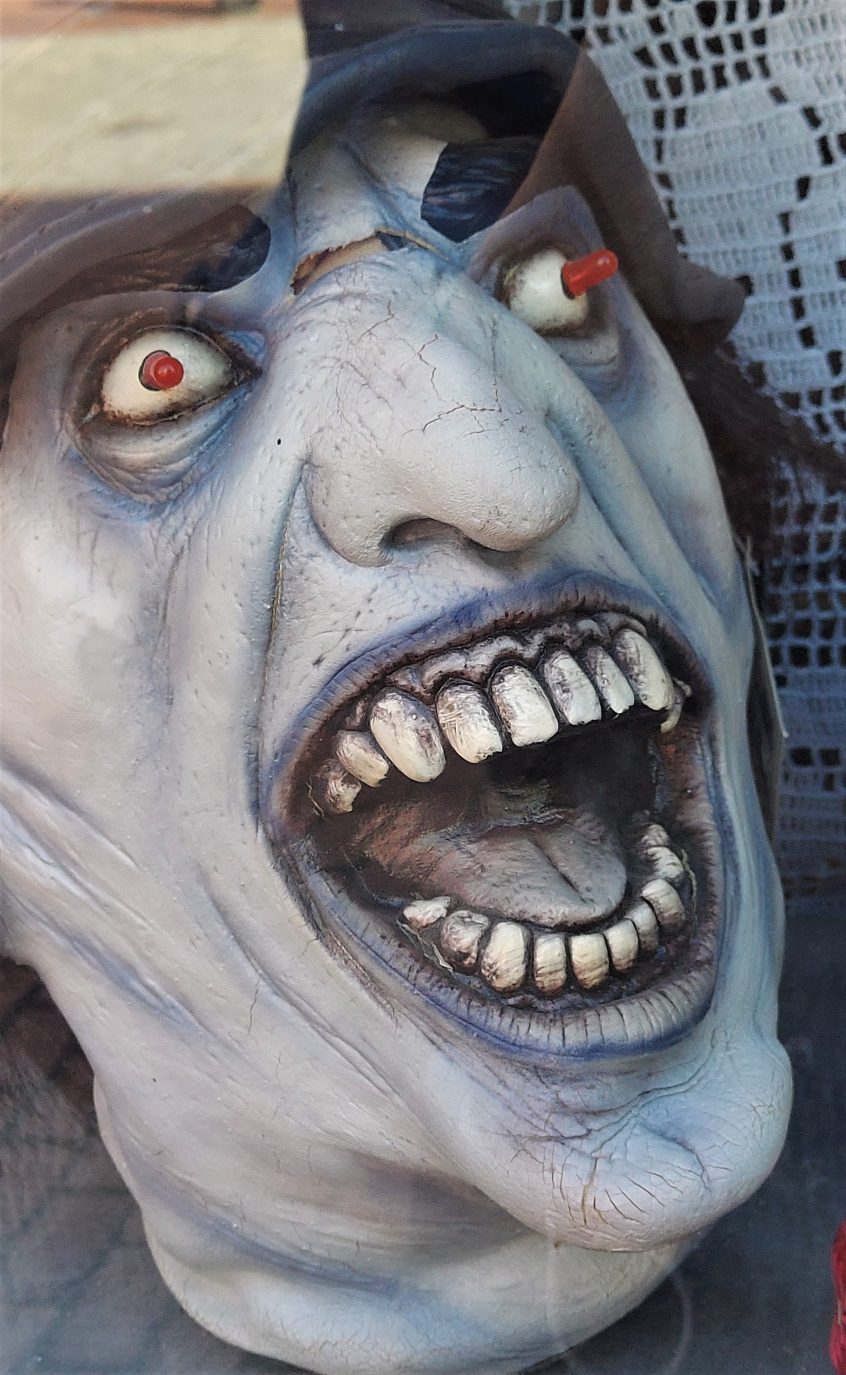 We are now traveling south, heading back to New York City. Our day was spent in Salem, Massachusetts, the stop we aborted last Saturday due to the traffic, crowds, and general mayhem.

Today, a Tuesday, was significantly calmer, though the city was still filled with people. I suspect that ANY day in October will be that way, culminating on Halloween.  The thought of being in Salem on October 31st fills me with dread—as scary as any haunted house, witches brew or ghoul.

Arriving early, we snagged a prime parking space and managed without hassle to get tickets for a couple of things we wanted to do. While we waited for a trolley tour, I visited the Salem Witch Trials Memorial and the Old Burying Point Cemetery with weathered gravestones dating back to 1637.  The Memorial was dedicated in 1992 by Nobel Laureate, Holocaust survivor, and author Elie Wiesel, who noted, “We still have our Salems.” It’s an eerie place, with simple stones listing the name of the “witch” and date hanged (nineteen in total). Those hanged were unrepentant and refused to admit to being a witch.  Those who did admit to it were instead sent to jail—one hundred and fifty of them out of a population of nine hundred.

The trolley tour took us throughout the city.  The guide was great, incorporating humor and history, pointing out all sorts of things I never knew.  First, the witch trials only lasted nine months and were generally forgotten until Arthur Miller wrote The Crucible in response to the McCarthy hearings. Now, the city is primarily known for the trials. However, there were many other notable events and achievements.  The city started as a spice trading port and America’s first millionaire made his money importing pepper through Salem. Parker Brothers (of Monopoly fame) had their headquarters and factory in Salem. The US National Guard started in Salem. Nathaniel Hawthorne was born in Salem and The House of the Seven Gables about which he wrote, still stands.  The city played a significant role in the Revolutionary war. And on and on.

While most people don’t realize it, Salem is a port city with a deep harbor and some lovely beaches.  There is spectacular architecture.  The Peabody Essex Museum is the oldest continuously run museum in the country. But the history and all the rest take a back seat to the witches.  The town and its visitors are witch and Halloween crazed.

We watched a re-enactment of a witch trial, which was both funny and scary when you realize how easily people can be accused erroneously and convicted based on hearsay.

Downtown Salem is awash in wonderful tackiness and silliness. Every store and eatery had a queue of visiting witches and warlocks (as well as ordinary folk like us).  It’s great fun. But a warning, do NOT go on a weekend in October and definitely don’t go on Halloween unless you really love crowds (think Times Square on New Year’s Eve.)