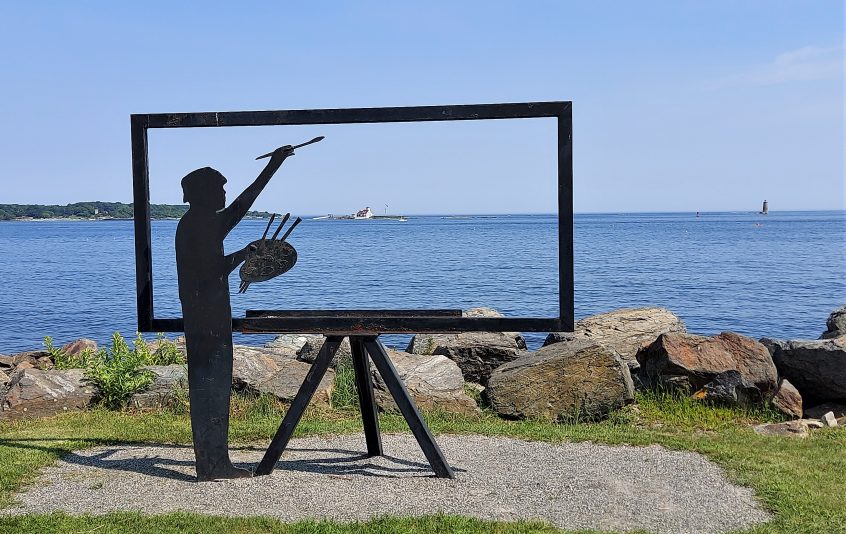 New Hampshire has a very short shoreline on the Atlantic, a mere eighteen miles. Yesterday I explored most of it, going from pristine to honky-tonk.

Most of the day was spent in Portsmouth, a town I’m astonished I’ve never been to before.  It is utterly charming.  Yes, it is a tourist town, but with good reason. It’s got a lovely harbor, wonderful old buildings, cobblestone and brick streets, museums, and gardens. Oh yes, and lots of shopping and restaurants.

I ambled through town for over two hours.  Then, hot and sweaty, I ducked into a shop to absorb some much-needed AC.  While there I chatted up a saleswoman, who gave me a tip for lunch. I walked to a different section of the harbor, behind some converted warehouse buildings to the Old Ferry Landing restaurant. Seated looking at the harbor, I ate lobster salad. She was right, both the food and atmosphere were superlative.

Then I headed south along the coastline, stopping frequently to take in the lovely scenery. I passed “millionaire’s row” in Rye, a stretch of homes that would rival Newport, Rhode Island. There were completely empty beaches, no lifeguards, but miles of pristine sandy shore.

At the southern end is Hampton beach.  That’s where all the people were. Miles of motels, ice cream stands, hot dogs and all the other accoutrements of a popular beach resort, the beaches were packed. I observed from the car and then turned inland.

My final stop was in Exeter. It’s another lovely old town best known for Phillips Exeter Academy, a prestigious high school.  Its alumni list is impressive, including Gore Vidal, Dan Brown, and Mark Zuckerberg. The campus rivals that of many small universities.  I also stopped at Exeter Fine Crafts – a shop featuring the work of New Hampshire craftspeople.