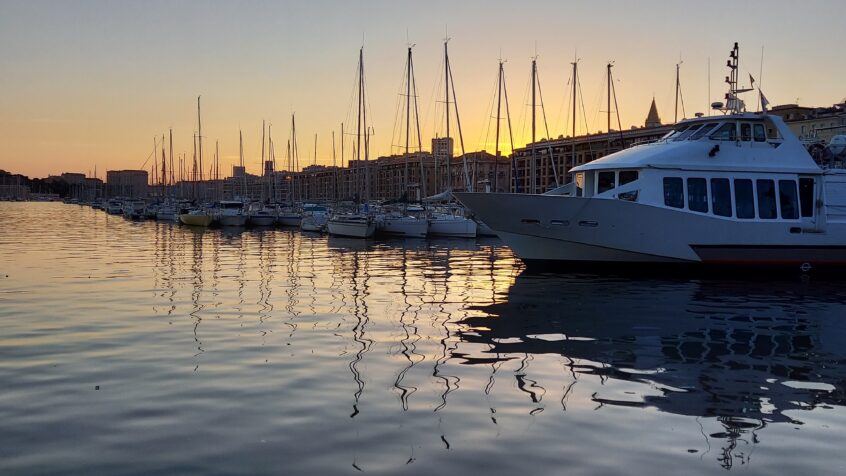 It’s 9:15PM and my friend Sue and I are in Marseilles, France.  We just enjoyed a glass of wine and wonderful Bouillabaisse dinner, in a restaurant with a view of the old port.

But since last evening it has been a crapshoot as to whether we, and our luggage, would make it here.

It started with a gate change and one hour delay. That became another gate change, then another with the departure time getting later and later. The gates were far apart.  And we got no notifications until we finally went to the American Airlines customer service desk.

I have lifetime platinum status with American, so you’d think their service would be superb. Au contraire.  We were assured we’d make our connection. Clearly the customer service rep had never tried to get from one terminal to another at London’s Heathrow airport.  To help us out, he ordered wheelchair service which he promised would whisk us through security and get us to our gate with time to spare.

Not exactly what transpired. In Heathrow the AA wheelchair manager was, and I’m putting this nicely, disorganized, confused and confusing, not to mention slower than molasses.  She told us we’d need to rebook our flight and had no idea what would happen with our luggage. Two customer service agents later, we were rebooked onto the next flight to Marseilles—which also took off late.

It was a relief to touch ground in Marseilles. Despite dire warnings about needing contact forms filled out and proof of covid vaccination, the customs agent merely glanced at my passport, stamped it and shooed me away.

Our luggage was waiting for us, for which we are grateful. The taxi driver drove as if he were trying to win the Grand Prix and we arrived at the hotel in record time, despite heavy traffic.

The hotel is lovely.  Too bad we’ll only be here for one day.