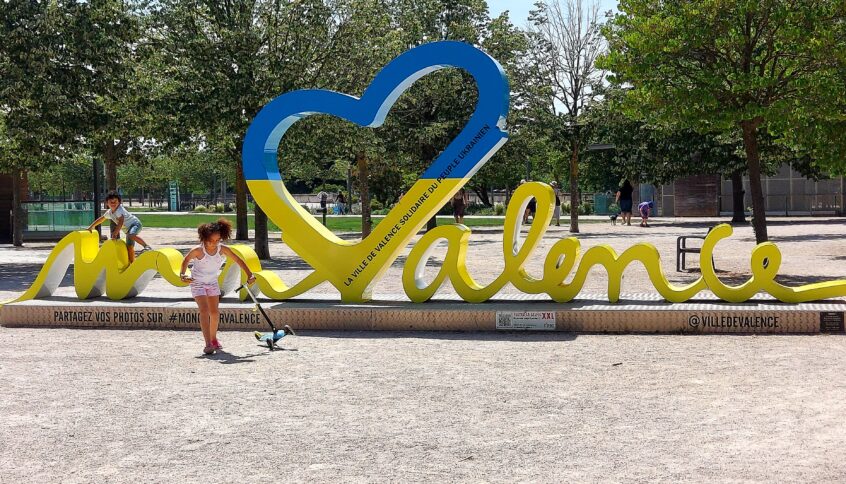 Last night we took a short scenic cruise to see Avignon’s famous Pont Bénezet (bridge) lit up. It’s famous due to a song about it.  Most tourists assumed (as I did) that it was destroyed during the second world war.  In fact, it was abandoned long before that. Built in the 12th century, it was washed away several times by the flooding Rhone River. After a flood in the seventeenth century, they finally stopped rebuilding it. It’s now been designated a World Heritage site by UNESCO.

The boat then continued upriver towards Valance, passing through a series of locks.  I woke this morning to the sound of the boat scraping along the side of a lock.  Late morning, we arrived in Valance. It’s a much less touristy city than either Arles or Avignon, but charming.

The city’s claim to fame is that Napoleon Bonaparte, when he was seventeen years old, was a military student here. The city had been a Roman military outpost and had a long tradition of training soldiers. No Roman buildings remain as they were built using sandstone that has eroded. The guide pointed out where Napoleon had lived and told us a story about his falling in love with a local girl.  The girl’s father rejected him as a suitor, believing he had no future. Bet he regretted that decision.

More interesting to me was park Jouvet, which was large and filled with locals. There was a kid’s train built in the 1950s and still used, a carousel and playgrounds, lots of streams and ponds, a grand fountain, walking paths, and rose garden.  It would have been nice to just hang out there for a while. There was a couple posing for wedding photos. Their expressions made me laugh as they shielded their faces from a drone buzzing above them taking photos got a little too close.

We walked through the streets of town, saw the cathedral and several large plazas. The highlight was a merchant’s home, La Maison de Tetes, the house of faces.  The façade is covered with ornate sculpture. Much of it has eroded (sandstone) but some faces have been restored and are wonderful.

Back at the boat we had a wine tasting and lecture – Jessup wines from Napa Valley and local Rhone wines.  Learned a lot about the differences and similarities of the two regions. At dinner more wine. It’s been a tough day (not).