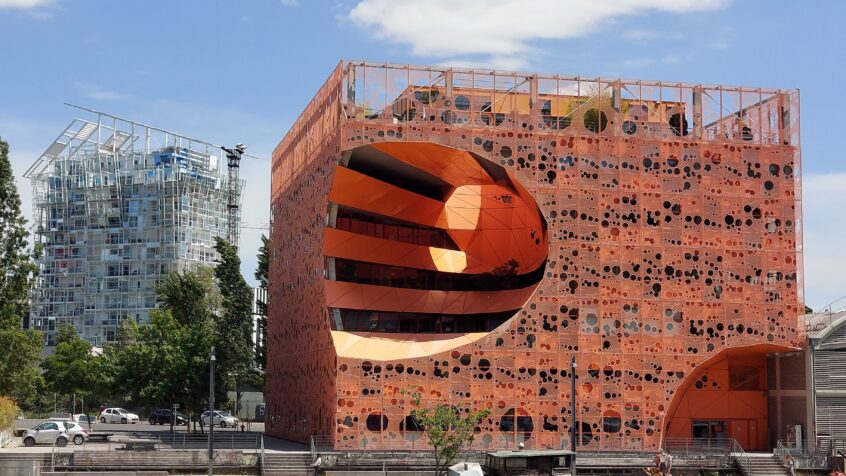 Prior to this trip I’d never heard of Vienne, so I was surprised by how much I liked it. We took a “Toonerville trolley” to a high point above the city that had an expansive view of the city. The Rhone River snaked through a city awash in red-tiled roofs.  Directly below where we stood was the massive, ancient Roman Theater. As with so many of the Roman remains we’ve seen, the theater is still in use. A jazz festival will be held there next month.

Vienne had a strong tie to Thomas Jefferson, a Francophile, and there is a plaque honoring him across from the Roman Temple of Augustus.  In the small archeological museum (housed in a former church) there was a fabulous collection of Roman artifacts.

From there our boat headed upriver. In several places there were very low bridges.  I was on the top deck and watched the pilot house get lowered. We were all warned to sit and duck—good advice.  Had we not done so, we would have been decapitated.

As we neared Lyons, the river splits into the Rhone and Saone. On the land between the two rivers, known as the Confluence, was some of the most dramatic new architecture I’ve seen.  In addition to a museum designed by Frank Gehry, there was one bright orange and one bright green building by the architecture firm Jakob and McFarlane.  Many, many others were also on this spit of land redeveloped from an industrial area over the past twenty years. I’d always thought of Lyons as an ancient city, so this wasn’t at all what I expected.

We did see the old part of the city, including the Cathedral and many small pedestrian streets.  However, there was a massive procession at the Basilica that overlooks Lyons, a marathon, a roller-skating race, and several other smaller festivals.  The city was VERY crowded. Still, I got a taste of Lyons and it’s now on my “must-return-to” list.