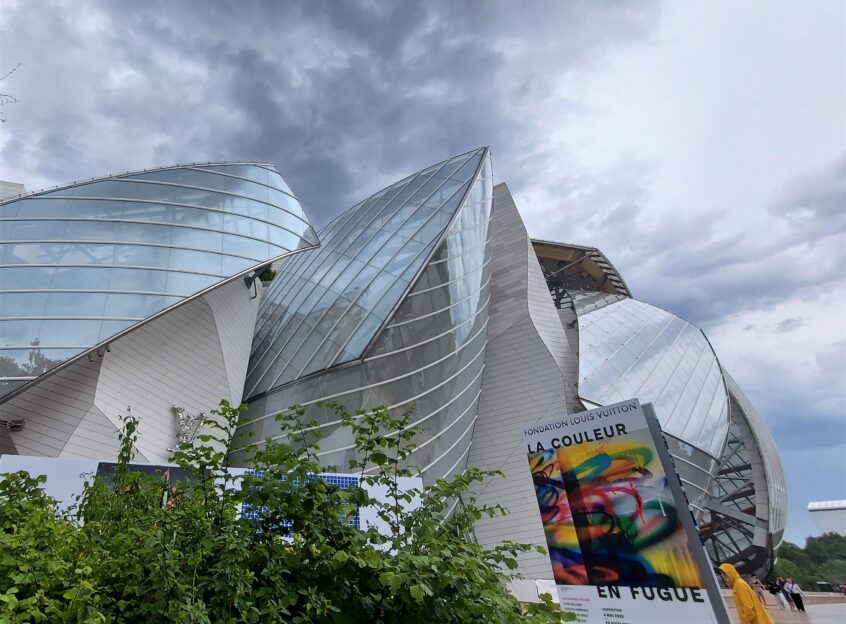 Today included some of the oldest and newest Paris sites. It started with the new – the Foundation Louis Vuitton.  The building, designed by Frank Gehry, is in the Bois de Boulogne and was completed in 2014.  It is an art museum, but I doubt many people go there for the art.  It’s the building that’s the star.  I was in the galleries for no more than ten minutes, the remainder of my time was spent admiring the architecture and views.

Shaped like a series of wings, there are outdoor terraces and walkways with panoramic views of Paris.  While visiting, there was a thunderstorm followed by bright sunshine, then back to rain. Standing in a covered area listening to torrential rain pound against the roof was an auditory wonder.  When the sun appeared, it was as if I was in an entirely new place.

The videos and exhibits on the construction of the building were compelling—especially a time lapse film showing how work went on through the seasons.  A drone was used to provide views of the building from above, a unique and compelling perspective.

The Metro took us to the Marais neighborhood. This is one of the oldest sections of Paris.  It was fashionable during the time of Henry IV and an area housing nobility. Later is became the city’s Jewish quarter.  Now it is home to hipsters.

Lunch was in a brasserie facing the elegant St. Paul’s church. From there it was a short walk through narrow, winding streets to the Carnavalet Museum.  The streets were filled with boutiques, wine bars, restaurants of every cuisine imaginable, and buildings with elaborate facades. The museum, which tells the history of Paris, is a gem. Had I not been exhausted by that point I could have spent more time there.  Next trip, I’ll return.

It was time for a drink. Another short walk over to Place des Vosges, the oldest planned square in Paris.  Victor Hugo wrote Les Misérables while living in one of the buildings facing the park.

Thank you, Google Maps, for suggesting the #96 bus.  It took us from Place des Vosges to one block from our hotel.  It passed City Hall, Notre Dame and was a breeze. Dinner at a local restaurant a five-minute walk from the hotel—that was about all that seemed possible.  As with most restaurants in Paris, the wine and food were great.